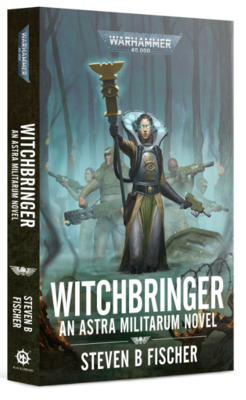 Suffer not the witch to live, unless by their service they might earn redemption. This is the creed of the Scholastica Psykana, a brutal foundry in which those with psychic power might be taught to serve. On the eve of her sanctioning as a primaris psyker within these very halls, Glavia Aerand, former captain of the Cadian 900th Regiment, receives a startling premonition – one concerning her old unit, and a dangerous psychic artefact hidden on the planet where they are deployed.

After a reunion she never expected – or wanted – Aerand finds herself mired in a vicious campaign on the psychically active world of Visage, where the shallow seas and endless fogs are rumoured to swallow the souls of the dead. Haunted by growing suspicions of her new commander and the manifestations of the sinister relic, Aerand must trust in her new-found abilities to keep her former comrades alive, and confront an ancient threat that could consume Visage entirely.

Written by Steven B Fischer