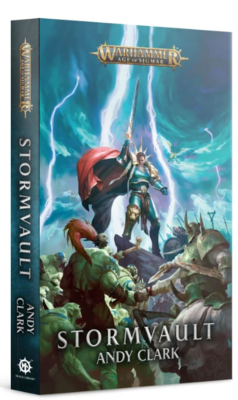 An ancient labyrinth of eerie subterranean ruins and creeping shadow, the dead city of Mordavia has long concealed a secret of unimaginable power. Now, as vast armies gather and war drums thunder, the perilous treasures of this cursed city are about to be unleashed. Lord-Celestant Kalyani Thunderblade leads her Celestial Vindicators into battle, determined to ensure that the city’s secrets remain forever under lock and key. Yet, the odds are stacked steeply against her.

Plague-ridden legions of Maggotkin, swarming tides of skaven, brutal greenskin hordes, and mercenary Kharadron Overlords are all racing for the prize, shattering the sepulchral silence as they transform Mordavia’s ruins into a blood-drenched battleground.

Worse still, something monstrous stirs ever closer to wakefulness deep beneath the city’s buried streets. At the head of a desperate alliance, Thunderblade must battle twisted warlords, rising storms of dark sorcery, and her own inner demons to achieve victory in Mordavia, lest she pay the ultimate price…