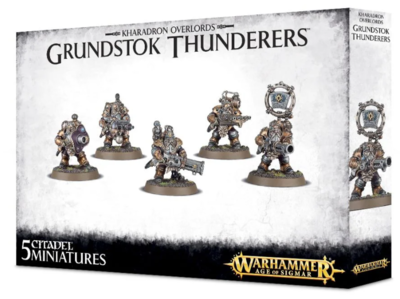 This multi-part plastic kit contains the components necessary to assemble 5 Grundstok Thunderers, professional soldiers and the main fighting force of the Kharadron Overlords. Each is armed with an aethershot rifle, with some impressively chunky special weapons available as options – an aetheric fumigator, a Grundstok mortar (with an extra bomb for modelling on the base), an aethercannon (so powerful that the duardin carrying it needs a blast shield) and a five-barrelled gun known as the Decksweeper. Their sealed suits of armour are covered in valves, pipes and respiratory systems used to make the air palatable to their aether-gold addled lungs.

This kit comes as 61 components, and is supplied with 5 Citadel 32mm Round bases.