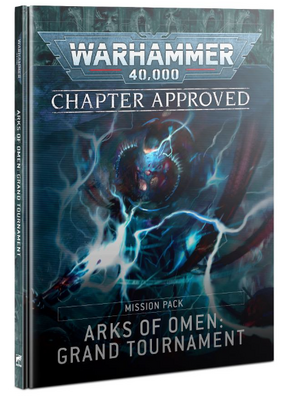 – Two mission packs comprising nine missions each for Incursion and Strike Force battles, designed to offer a wide array of challenges to players

– A brand new Arks of Omen Detachment to use when mustering your army, making roster-building more flexible and intuitive than ever before

– Guidelines for setting up and playing a matched play or Grand Tournament-level competitive game, including suggested battlefield size, time limit, and how best to determine secondary objectives

– A blank tournament scoring sheet for you to photocopy and use, with an annotated example of how to fill it out
​
– The basic rules needed for matched play games of Warhammer 40,000, including a glossary and explanation of rare rules, as well as an introduction to the Battle Ready standard of painting for your miniatures

With this book, you will also receive a code to unlock Chapter Approved – Arks of Omen: Grand Tournament Mission Pack content in Warhammer 40,000: The App.