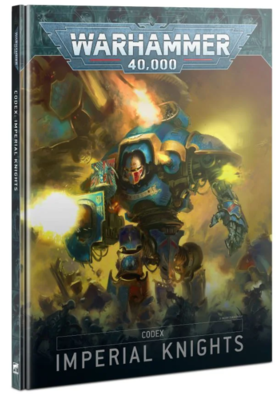 – In-depth background on the Imperial Knights, their relationships with the Imperium's factions, and the structure of their Great Houses
– Majestic artwork depicting the glory of these regal warriors and their titanic steeds, as well as the livery of their most notable Houses.
– All the rules you need to play an Imperial Knights army, including the Freeblade Lance Army of Renown, and how to include a Knight in other Imperium armies
– Complete rules for Crusade campaigns and narrative games, in which your Knights embark on great Quests to become legends throughout the Imperium
– An 'Eavy Metal miniatures showcase full of lovingly painted Imperial Knights miniatures