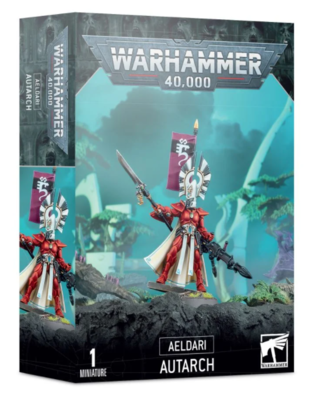 This kit builds one Autarch, who can be customised with a huge variety of choices – allowing you to build your very own Aeldari leader according to the Aspect Warrior Paths they have mastered. Choose between a star glaive and Scorpion chainsword for close combat, and blast away foes with a shuriken pistol, death spinner, Reaper launcher, or Dragon fusion gun, and equip your choice of Howling Banshee mask and Warp Spider jump generator. Other customisation options include alternate heads, a choice of torsos, and a backpack-mounted banner. This miniature is also fully compatible with components from the Winged Autarch kit, offering even more potential combinations.