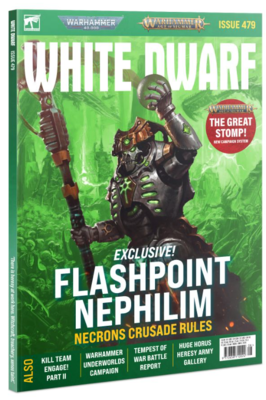 Here’s what you can look forward to in the August issue:

Contact!
Letters, questions and pictures of miniatures sent in by you, our readers.

Worlds of Warhammer
An introduction to the Mortal Realms and the Aetheric Void.

Inside the Studio
Check out the games we’ve played and the models we’ve painted this month.

WARHAMMER 40,000
- Echoes from the Warp
How do you go about writing an army list? Richard Butler investigates.

- Flashpoint Nephilim: A Quiescent Threat
Imperial forces investigate the threat posed by the Necrons and their mysterious pylons.

- Flashpoint Nephilim: Dynastic Crusade
A swathe of new Crusade rules for each of six most prominent Necron dynasties. Our Will Be Done!

- Army Gallery: The Ironhelms
Edd Ralph’s modern reimagining of one of the Warhammer Studio’s classic Blood Angels armies – from way back in White Dwarf 139 (July 1991)!

- Flashpoint Rondhol: Land of Rivers and Rage
A new Flashpoint series set in one of Ghur’s most bestial continents – the savage Rondhol.

- Rules of Engagement
Lead Games Developer for Warhammer Age of Sigmar Matthew Rose talks about the direction and future of the game.

WARHAMMER UNDERWORLDS
- A Descent into Madness
The watery depths of Harrowdeep await in this Warhammer Underworlds narrative campaign for 2-4 players.

KILL TEAM
- Kill Team Engage!
The Dwarfers send their operatives on deadly missions in a bid to complete their Spec Ops.

WARHAMMER: THE HORUS HERESY
- The Fate of Barbarus
Armies from six Space Marine Legions stand ready for civil war, as the Raven Guard, Space Wolves and Dark Angels take the fight to the Death Guard, Sons of Horus and Iron Warriors on Barbarus.

- The Plains of Orthrya
A stunning battlefield built and painted for the upcoming Fate of Barbarus Battle Report.

BLACK LIBRARY
- Habeas Corpus
Probator Calix investigates a murder in which a psyker is the primary suspect in this Warhammer Crime short story by Jude Reid.