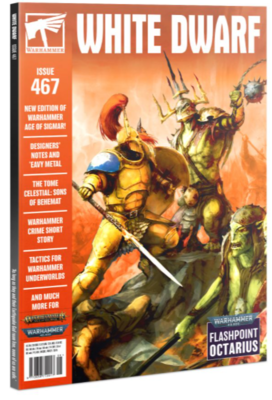 Here’s what you can look forward to in August’s issue:

Contact!
Letters, painting advice, and beautifully painted miniatures – plus a truly astounding model of the month.

Worlds of Warhammer
The Warhammer Age of Sigmar background writers talk about crusades, cities, and new horizons in the latest edition.

Echoes from the Warp
Stu Black takes a look at open play gaming and how a deck of Open War cards could revolutionise your battles.

- Xenopurge
A story set in the cramped confines of an underwater facility full of Genestealers.

Designers’ Notes: The Noble and the Krule
A veritable army of miniatures designers chat to us about Stormcast Eternals clad in thunderstrike armour and Kruleboyz orruks!

Rules of Engagement
The Warhammer Age of Sigmar rules writers discuss some of the big changes to the new edition of the game – but only on a 3+.

A Tale of Four Warlords
The warlords of Chaos and Order reach the 1,500 point mark and show off their collections so far.

- Realmscapes: The Illuminant Realm
Join us for a deep dive into the history of Hysh and its many mystical lands. Includes maps – lovely, lovely maps!

- The Tome Celestial: Sons of Behemat
The history of gargants laid bare, including the tragic tale of Behemat and the march of his many sons.

- Also includes the first in an ongoing series of faction and battletome updates for the latest edition of Warhammer Age of Sigmar.
Includes updates for matched and narrative play, including: two core battalions, one grand strategy, three battle tactics for matched play, as well as a 3-page update for Sons of Behemat in Path to Glory campaigns.

- The Stomping of Matah
A mini Path to Glory campaign for a tribe of Mega-Gargants intent on flattening a Lumineth Realm-lords seaport. Includes rules, guidance, and a battleplan for playing through the campaign. Smashing stuff!

Glory Points
Part two of a series that looks into how the studio games developers create rules for Warhammer Underworlds warbands.

Path to Victory
Elathain’s Soulraid and Kainan’s Reapers get the tactical treatment this month.

Building the City of Ulfenkarn
Join us on a sightseeing tour of the alleys and deserted buildings of the Cursed City. Maps are available at the gift shop.

Lair of the Archeotek
The notorious Archeotek Kavos Druun is on the run! The Van Saar must bring him to justice in this series of three linked scenarios.

Brush Tips
The first of a brand new series from the ’Eavy Metal team. This month, Yndrasta and a Killaboss take centre stage as the team shares detailed breakdowns of the various paint recipes and techniques the team used in painting up these two incredible miniatures.

Grit in the Wheels
A White Dwarf exclusive Warhammer Crime short story in which the sanctioners of Varangantua tackle a deadly cult.