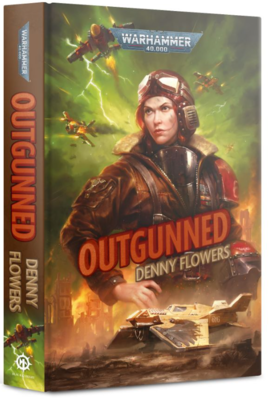 The Aeronautica Imperialis are the masters of the skies in the 41st millennium, waging wars of breakneck aerial combat where only skill stands between victory and death. Flight Commander Lucille von Shard is an ace, a living exemplar of what it means to fly in the name of the Emperor… or so Propagandist Kile Simlex is told.

Braving the foetid waters of Bacchus and its rampaging greenskin hordes, Simlex is tasked with producing a cinema-pict portraying Shard as an Imperial hero. Shortly after his arrival planetside, however, he discovers the war effort is in shambles – the Imperium’s overstretched forces are in full retreat, the local planetary governor is desperately downplaying the conflict at every turn, and Shard is an arrogant misanthrope who only avoids sanction due to her consummate skills.

But these skills may prove the only hope of survival, for something vast and terrible lurks within the clouds. The Green Storm approaches.