Masters of the Hunt 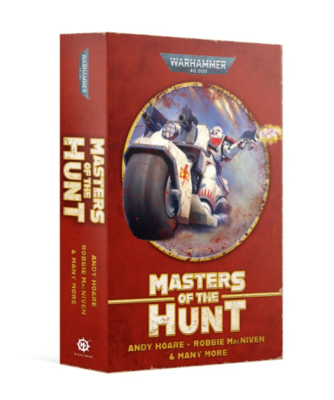 The White Scars, peerless huntsmen, stalkers of the plains and bearers of the storm's fury, ride out to protect the Imperium from the dark powers of Chaos and the machinations of the foul xenos. Through the teachings of their Primarch, Jaghatai Khan, these warriors temper ferocity with keen wisdom. To face them on one of mankind's myriad battlefields is to know death, for should a survivor escape with their life, they will not do so for long. Kor'sarro Khan, Master of the Hunt, cannot be outrun.

Consists of the following novellas and short stories:

- Hunt for Voldorius, by Andy Hoare
- The Last Hunt, by Robbie MacNiven
- Blood Oath, by Phil Kelly
- Hunter's Snare, by Josh Reynolds
- The Thrill of The Hunt, by Anthony Reynolds
- Kor'sarro Khan: Huntmaster, by Graeme Lyon