HEIRS OF THE EMPEROR (HB) ENGLISH 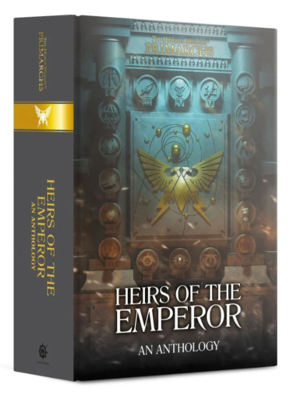 Bringing together three separate anthologies from the Primarchs Series in one place, plus five additional short stories, this volume offers a comprehensive and in-depth view of the primarchs who led the Legiones Astartes – warriors of legend, brothers torn asunder, heirs of the Emperor.

This anthology includes the following short stories:
– The Passing of Angels, by John French
– The Abyssal Edge, by Aaron Dembski-Bowdwn
– Mercy of The Dragon, by Nick Kyme
– Shadow of the Past, by Gav Thorpe
– The Emperor's Architect, by Guy Haley
– The Ancient Awaits, by Graham McNeill
– Misbegotten, by Dan Abnett
– A Lesson in Iron, by David Guymer
– The Atonement of Fire, by David Annandale
– Lantern's Light, by James Swallow
– Canticle, by David Guymer
– The Verdict of the Scythe, by David Annandale
– A Game of Opposites, by Guy Haley
– Better Angels, by Ian St. Martin
– The Conqueror's Truth, by Gav Thorpe
– The Sinew of War, by Darius Hinks
– The Chamber at the End of Memory, by James Swallow
– First Legion, by Chris Wraight
– Embers of Extinction, by Brandon Easton
– Lupus Daemonis, by Graham McNeill
– Skjalds, by Nick Kyme
– The Sixth Cult of the Denied, by David Guymer
– The Will of The Legion, by Andy Clark
– Council of Truth, by Mike Brooks
– Terminus, by Chris Wraight
– Grandfather's Gift, by Guy Haley