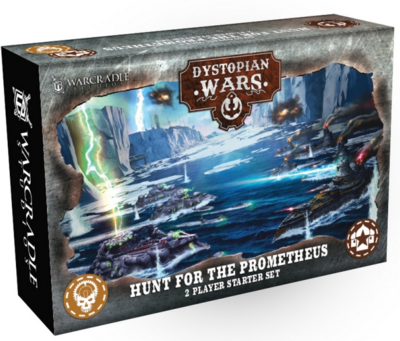 This box set not only provides everything you need for two players to start playing Dystopian Wars, but it also contains a campaign that details the theft of the prototype Hypatia Class Generator ship by the Russian double agent Helsinki Markov. The Commonwealth Intelligence Service (known as the Okhrana) have seen a chance to acquire Enlightened secrets and add new technology to their arsenal in order to better defend the Commonwealth. They risk reprisals from the Enlightened but as long as the technology is theirs it would be worth the consequence. The Covenant guard their secrets jealously and losing the Generator ship will cost them years of research and development. The game is afoot and the stakes are high for both sides.

The Hunt for the Prometheus will walk players through the rules of Dystopian Wars game by game, slowly building up to the final confrontation between the Russian Commonwealth Fleet and the Covenant of the Enlightened Fleet.

The Hunt for the Prometheus starter set contains everything you need to play Dystopian Wars, containing;

Each Cruiser can alternatively be built as either Antarctica, Chatelet, Lovelace, Stiletto or Ulysses Class

Each Frigate can alternatively be built as Germain Class

Each Cruiser can alternatively be built as either Norilsk, Oleg or Sineus Class