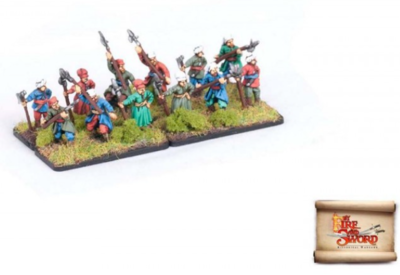 Azab infantry are recruited from townsfolk and peasants on a principle similar to that of Polish Chimney Infantry and are used for manning less important frontier fortresses. As an irregular formation their weapons were diverse, such as bows, swords, shields, halberds and if firearms were present, were of poor quality.

This blister includes 4 bases of Azabs armed with halberds, which could be used in Ottoman Skirmish Forces and Divisions. These metal miniatures are in 15mm scale.