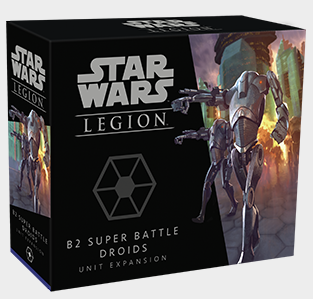 The B2 Super Battle Droids Unit Expansion provides your army with six B2 Super Battle Droid miniatures to add to your Star Wars: Legion collection. Four of these miniatures feature the standard wrist cannons seen on most B2 battle droids and three of them can be posed in a variety of positions. Meanwhile, separate B2-HA and B2-ACM miniatures menace opposing armies with heavy weapons.

Deploy a unit of hulking B2 Super Battle Droids to your Star Wars: Legion battles with six new miniatures!

Add a B2-ACM Trooper or a B2-HA Trooper for even more ways to attack!