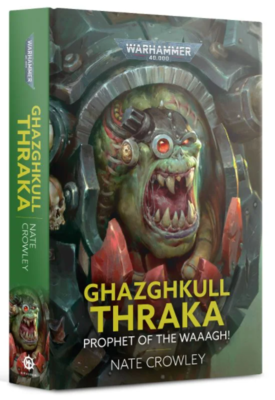 Of the billions of greenskins who swarm the galaxy, the name of one strikes fear into the hearts of human and xenos alike – Ghazghkull Mag Uruk Thraka.
The Warlord of Warlords.
The Beast of Armageddon.
The Prophet of the Waaagh!
With his tusks, fists, and power claw, he does the holy work of Gork and Mork – and soon all worlds will burn in his bootprints.

Mystery shrouds the origins of such a beast. Rumours abound that the mighty warlord was once just like any other ork – but if that is the case, how did he rise from a lowly lad to the biggest of bosses? Many have lost their minds trying to unravel the secrets behind his rise, and Lord Inquisitor Tytonida Falx is no different. She has headed into the murky depths of heresy to find the answer – but this time, something is different. This time, she has something the others did not. She has custody of the one creature in the universe who claims to know the truth of it all – Ghazghkull’s banner bearer: Makari the Grot.