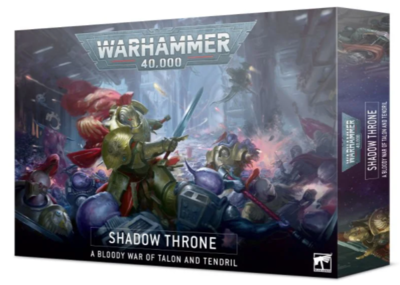 - 1x Blade Champion
- 3x Allarus Custodians, with the option to build one miniature as a Shield-Captain, and one as a Vexilus Praetor
- 5x Witchseekers, able to be built as Vigitalors or Prosecutors

A 32-page Shadow Throne campaign book covering the narrative of the Unthinkable War, which sees the Adeptus Custodes and Sisters of Silence in conflict with a covert uprising of Genestealer Cults beneath the Imperial Palace itself. This book contains Datasheets for everything in the box, as well as rules for the Deadly Ambush Theatre of War, a two-mission campaign, and Crusade rules giving each faction a Battle Trait table and both an Artificer and Antiquity Relic. All together, this makes Shadow Throne a brilliant choice for new and existing players alike.