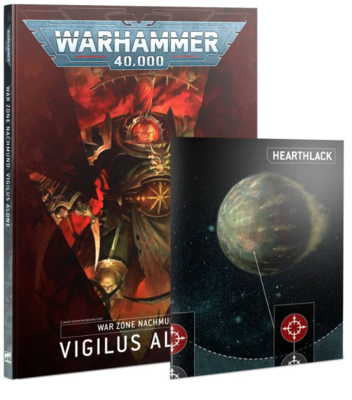 - The story of the war's later stages upon Vigilus and the wider threat to War Zone Nachmund, detailing the desperate battles and shadow wars on the planet's surface, as well as the conflicts within neighbouring systems
- An in-depth campaign system you can use to join the war for the Vigilus region on the side of the pious Imperial defenders or rampaging Chaos Invaders
- A wealth of Crusade content, including rules to create renowned Adeptus Astartes banners and options to congregate your units into a crusading Army of Faith
- Additional rules content including a Codex Supplement for the Adepta Sororitas Order of the Bloody Rose, a Vanguard Spearhead Army of Renown – a set of exciting themed rules providing a new way of collecting a Warhammer 40,000 force – for armies of Space Marines, as well as Legendary Missions and lots more

With this book, you will also receive a War Zone Nachmund: Vigilus Alone Campaign Poster.

You will need a copy of the Warhammer 40,000 Core Book to use the contents of this book.