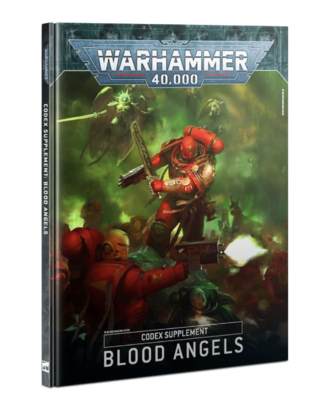 Codex: Blood Angels contains a wealth of background and rules – the definitive book for Blood Angels collectors. Within this 144-page hardback, you’ll find:

- The Angelic Host: the origin of the Blood Angels, the story behind their homeworld of Ball, the horror of the Flaw and the introduction of Primaris Space Marines to their ranks;
- Ordering the Host: a detailed breakdown of the Blood Angels’ Chapter organisation, their heraldries and vehicle markings;
- Colour schemes and heraldries for 8 successor Chapters: Angels Encarmine, Angels Sanguine, Flesh Tearers, Carmine Blades, Angels Vermillion, Blood Drinkers, Knights of the Chalice, and Lamenters;
- A Chronicle of Heroes: a timeline of major Blood Angels engagements, from the founding to the present;
- Background and details on each character and unit available to a Blood Angels army;
- A showcase of beautifully painted Citadel miniatures, with example armies featuring everything from individual images of models to battle scenes on terrain.

Everything you need to get a Blood Angels army primed for games of Warhammer 40,000 is in here: