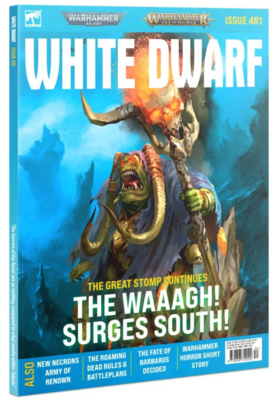 Here’s what you can look forward to in the October issue:

- Contact!
Letters, questions and pictures of miniatures sent in by you, our readers.

- Worlds of Warhammer
This time it’s about actual worlds as we take a look at the different types of planets of the Imperium.

- Inside the Studio
Check out the games we’ve played and the models we’ve painted this month.

WARHAMMER 40,000
- Flashpoint Nephilim: The Breach Reinforced
The Imperial Fists and Black Templars join forces against the encroaching Necrons in this background article that expands the narrative of the ongoing conflict against the Necrons in the Nephilim Sector.

WARHAMMER: THE HORUS HERESY
- Battle Report: The Fate of Barbarus Part 2
Can the Death Guard hold out against Lion El’Jonson and his allies?

- Barbarus Burning
The outcome of the war, and The Fate of Barbarus, recorded in the annals of history for all time.

WARHAMMER AGE OF SIGMAR
- Flashpoint Rondhol: The Waaagh! Surges South
Da Choppas continue their rampage across Rondhol on their way to Everquake City.

- Flashpoint Rondhol: The Great Stomp Part 2
New campaign rules and two new battleplans for the ongoing war in the Realm of Beasts.

- The Roaming Dead
It's October, it's almost Halloween, and that of course, means zombies!
Take on a horde of Deadwalker Zombies in two spooky fun narrative play battleplans set in Ulfenkarn. Do you have what it takes to survive the night?

KILL TEAM
- Kill Team Engage!
The Dwarfers head into space for the next stage of their on-going campaign.

BLACK LIBRARY
- Warhammer Horror: Hunger in the Dark, by Richard Strachan
An intrepid explorer, Pythius, is trapped in a mountain full of ghouls, in this Warhammer Horror Short Story. Choose their fate with four possible endings.

Each physical copy of issue 481 comes with a double-sided Achievement Tracker and four Territory Cards to aid your Great Stomp Flashpoint campaign.