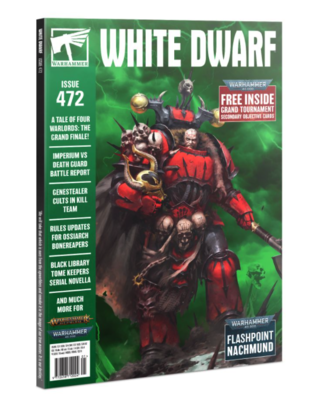 Here’s what you can look forward to in January's issue:

Warhammer 40,000 Flashpoint: Nachmund
- Nachmund Campaign
The planetary systems around the Nachmund Gauntlet – one of the few stable warp routes to the Imperium Nihilus – are under attack by the forces of Chaos. A war of faith has begun!

- What Duty Asks
It’s loyalists versus heretics in this short story all about faith, conviction and running at the foe with bayonets fixed.

- Righteous Warfare
A host of new rules for embarking on a Crusade of Faith with your Warhammer 40,000 army.
Includes new rules, 4 Agendas, 6 Battle Traits, 3 Psychic Fortitudes and 4 Artificer Relics for use in your Wars of Faith Crusade games.

A Tale of Four Warlords
Joel, Jonathan, Drew and Lydia have completed their challenge! See their impressive armies in all their magnificent glory right here.

Battle report: Infernal Deliverance
It’s the faithful against the feculent in this matched play game that pits the Adepta Sororitas and Imperial Knights against the Death Guard.

The Tithe-Takers
A new campaign for the Ossiarch Bonereapers. Be warned – you’ll need to defeat your foes and collect their bones to keep your army on the march.

Rules of Engagement
Louis Aguilar looks back at how the third edition has changed how we build armies.

The Winter Warriors
Modelling and painting advice and inspiration for the winter warriors of the Mortal Realms. Wrap up warm!

The Lurking Wyrm
Are you super-stealthy? Do you like stabbing your enemies in the back? Perhaps you can join a Genestealer Cult kill team – the sneakiest of all kill teams!

A Fresh Page
Part one of the six-part serialised story, Heirs of Reason, focusing on the Tome Keepers Chapter and the warriors of the 3rd Company – the Godbreakers.

Each physical copy of Issue 472 comes with 24 Secondary Objective Cards, including 23 from the new Chapter Approved: War Zone Nachmund: Grand Tournament Mission Pack and 1 ‘How to Use’ card.