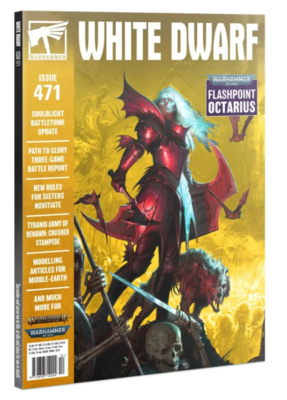 Here’s what you can look forward to in December's issue:

Worlds of Warhammer
Ever wondered how to create a story for your Warhammer 40,000 army? Rogue Trader Andy Clark provides inspiration.

WARHAMMER 40,000 FLASHPOINT OCTARIUS:
The Red and the Dead Part II
The Black Templars lead a new crusade against the Orks and Tyranids of the Octarius Sector.

The Wyrm Below
It’s superhuman warriors versus extragalactic aliens in this action-packed short story.

The Butcher Town Wars
Exciting campaign rules for fighting on Abundantia, including new Theatre of War rules for Bloodstained Manufactorums, 3 Crusade Relics and a Mission – the Butcher Town Thunderbrawl!

Army of Renown: Crusher Stampede
What happens when the Tyranid Hive Fleets get angry? They make monstrous monsters! Here are new rules for fielding a full monster army – Tyranids with 2 wounds or less need not apply!
Provides 3 Warlord Traits, 3 Psychic Powers and 7 Stratagems.

Da Glorious Revolshun!
Da Red Gobbo is back, bringing festive cheer and a bag of baubles that look suspiciously like grenades. Check out the new model and its Legends rules here!

A Tale of Four Warlords
It’s David versus Goliath as half the warlords paint infantry while the others paint massive monsters!

Rules of Engagement
Games developer Sam Pearson explains the Path to Glory campaign system and how to make your heroes heroic! Then…

Battle Report: Quest of Burning Blood
Sam leads his Blades of Khorne against Lyle’s Nighthaunt in a bloody three-battle campaign to reclaim an ancient blade. But can he defeat the denizens of Shyish?

The Invidian War
A multiplayer campaign that pits vampire against vampire, both on the battlefield and at court.

There and Back Again
Join us on an adventure as we look back at the twenty-year history of the Middle-earth Strategy Battle Game that first began way back in White Dwarf 255.

Fantastic War Hosts: Legions of Middle-earth
Eight pages of stunning Middle-earth miniatures painted by the Free Peoples in and around the studio.

White Dwarf 471 contains a cardboard insert which includes a White Dwarf Hobby Bingo card for 2022, as well as a Campaign Map for the Invidian War campaign covered in this issue.