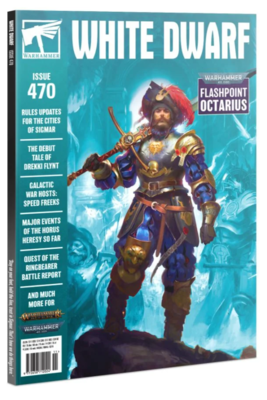 Here’s what you can look forward to in November's issue:

Contact!
Letters, painting advice, and beautifully painted miniatures. Plus: a Sylvaneth collection and a question about red hats!

Worlds of Warhammer
Part two of the FAQ on the background of the Mortal Realms. This time: realmstone, realmgates, and calendars.

Inside the Studio
We talk about some of the models we've painted and the games we've played over the last month.

Echoes from the Warp
Robin Cruddace joins us to talk about keywords and why they’re a core component of the rules.

A Tale of Four Warlords
Four mighty heroes (well, three and a very angry god-shard) join our warlords’ forces as they reach the 125 Power mark. Things are hotting up!

Warhammer 40,000 Flashpoint: Octarius
- The Red and the Dead Part I
The vital agri world of Abundantia comes under attack from Orks and Genestealer Cultists.

- The Road War
Two new Flashpoint datasheets for Evil Sunz Characters, plus a Theatre of War for fighting on Abundantia and a suite of rules for a rolling road mission: Road Wars.

- Galactic War Hosts: Waaagh! Speed Freeks!
Brrrm brrrm, dakka dakka! Join us for eight pages of painting and modelling advice for the Ork Kult of Speed. Plus, a conversion guide for a Looted Wagon!

Rules of Engagement
Louis Aguilar talks about the exciting new direction the rules team have taken with upcoming battletomes.

- The Devouring Fogs
A campaign for the Cities of Sigmar set in the ever-shifting and terrifyingly dangerous Realm of Shadow, including a Battleplan.

Glory Points
We’re on the edge… of glory! Join us in Direchasm for a whole new way to play Warhammer Underworlds: Fatal Edge!

Titanica Infernus
A look at the new rules for Corrupted Titans and how to get the most out of them. Tails are a popular upgrade choice.

Battle Report: Quest of the Ringbearer
The Fellowship of the Ring battle across Weathertop, through Balin’s Tomb and over Amon Hen in this three-game Battle Report.

Battlefields of Middle-earth™
See how the incredible terrain used in the Amon Hen Battle Report was constructed and painted.

A Game of Diamond
Black Library author Guy Haley brings us the first adventure of Drekki Flynt, soon to be a household name!

SLEEVED ISSUE
Each physical copy of Issue 470 comes sleeved and includes the following: