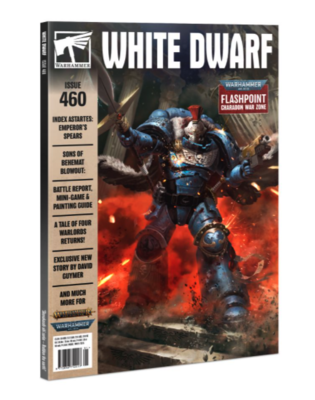 Here’s what you can look forward to in January’s issue:

Worlds of Warhammer
Jordan Green steals Phil’s column to chat about fantastic godbeasts and where to find them.

Outside the Studio
We talk about the models we’ve painted and the games we’ve played while working in our hab-complexes.

Flashpoint: Charadon
Charadon Campaign: The Chromyd Front
The first worlds in the Charadon Sector come under relentless attack by the Death Guard.

Canal of the Damned
The 77th Okharium Canalguard find themselves assailed by a thoroughly unpleasant foe.

A Tale of Four Warlords
The classic series is back! In this first instalment, we introduce the warlords and their new army projects.

Rules of Engagement
Games developer Louis Aguilar talks about the rules for the Sons of Behemat. It mostly involved thinking big.

Paint Splatter: Mega-Gargants
Four pages of useful tips on how to paint your very own Son of Behemat.

Battle Report: Get Ready to Rumble!
The Ogor Mawtribes take on the Sons of Behemat in a gigantic 3,000-point Battle Report, in what can only be described as a highly unconventional battle – featuring multiple boulders...

A Brawl for All Seasons
When Mega-Gargants fight for supremacy, things can only end badly, as shown in this short but brutally funny story.

The Mega-brawl
An exclusive mini-game where Mega-Gargants club, stomp, and headbutt each other to find out who’s the greatest!

Glory Points
Dave Sanders joins us to talk about the new season of the game: Direchasm!

A Decade in Review
Jim and Bob join us to talk about the fall of the NAF, the rise of the RARG, and the future of Blood Bowl!

A New Saga Begins
Black Library author David Guymer joins us to chat about dwarfs, duardin, Gotrek, and a new series that he is working on.

Chronicles of the Wanderer: Mother of Fire
The first tale in David Guymer’s six-part series about the duardin. In this instalment, a legend will be born in fire!