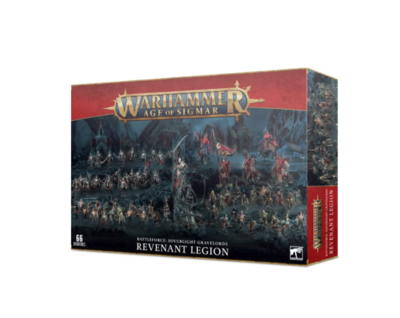 Afflicted by the terrible curse that gives them their name, the Soulblight Gravelords are powerful undead monstrosities eternally hungering for the blood that sustains them. Commanding legions of undead servants and terrifying monsters in the name of their creator, Nagash, these lords of Shyish make use of every means available to conquer the Mortal Realms and bring their prey into line.

Led by cruel and immortal Vampire Lords, the Soulblight Gravelords go to war with hordes of undead thralls, and elite lesser-vampires. Each dynasty fights in a slightly different way, attuned to their morbid commander's predilections.

The Revenant Legion is headed up by a bloodthirsty Vengorian Lord and a cadre of noble Blood Knights who lead bone-crushing charges as their foes are swarmed by hordes of freshly risen skeletons and zombies. This box makes it easier than ever to gorge yourself on the blood of your foes.

The above units are supplied with 1x 80mm round base, 5x 75x45.1mm oval bases, and 60 x 25 mm round bases. These miniatures are supplied unpainted and require assembly – we recommend using Citadel Plastic Glue and Citadel paints.