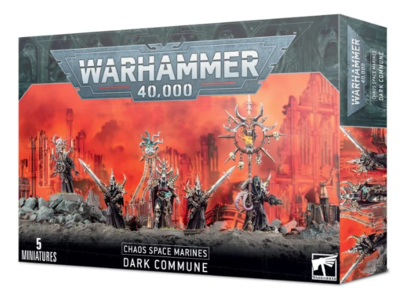 This multipart plastic kit builds a full Dark Commune, consisting of five models – one Cult Demagogue, one Iconarch, one Mindwitch, and two Blessed Blades. The members of this wicked cabal are clad in sinister robes, talismans, and daemonic masks reminiscent of their Chaos Cultist followers – but each boasts a unique appearance suited to their role. The Cult Demagogue wears a towering horned mask and pauldrons, wielding a staff adorned with a parchment strips and a foul familiar, while the Iconarch hoists a daemonic icon roaring with flames, his face hidden by a shadowy cowl. Both are marked by tentacled mutations, but the Mindwitch is by far the most twisted – a bloated, severed head cybernetically enshrined upon the body of a hooded cultist. The faceless Blessed Blades each wield an ornate ritual sword, standing ready to defend the Commune.