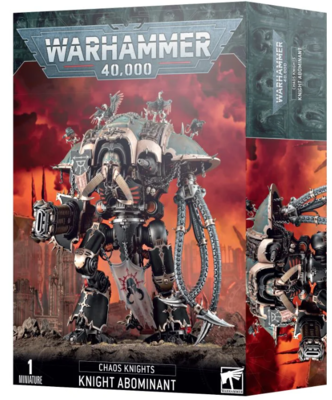 This multipart plastic kit builds one Knight Abominant, a titanic Lords of War choice for your Chaos Knights army – or a wandering Dreadblade for your other Chaos armies. This super-heavy walker is armed with a volkite combustor and writhing electroscourge, as well as a swinging balemace tail and a carapace-mounted diabolus heavy stubber. The Knight Abominant towers over most models on the tabletop, monstrous tusks jutting forward as avian pterrorshades perch atop its hull, and makes for a fantastic painting project. It offers a huge degree of customisation, with detailed components such as vicious faceplates and optional chains, pipes, spikes, and horns allowing you to create a truly unique engine of malice.

This kit can also be assembled as a Knight Abominant or Knight Rampager – any remaining weapons, faceplates, or accessories can be used as spares for your other Knight kits.