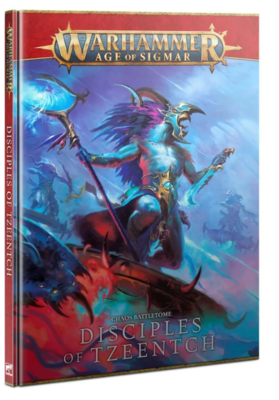 – A mercurial maelstrom of background information on the Disciples of Tzeentch, including their nigh-unfathomable plans, how their cults propagate through the Mortal Realms, and legendary figures such as Kairos Fateweaver
– Reams of mind-bending artwork that demonstrates the mutable majesty of Tzeentch
– 31 warscrolls and pitched battle profiles for the worshippers of Tzeentch, from braying Tzaangor herds to the spell-stealing Curseling
– Rules for the 8 most prominent Change Covens, plus command traits, artefacts of power, spell lores, and battle traits like Masters of Destiny and Arcane Armies
– Path to Glory campaign rules that task you with gathering resources for arcane rituals, plus warscroll battalions and Aerial Battles rules for use in narrative play
– Matched play content including 4 grand strategies and 5 battle tactics, as well as a core battalion for Kairos Fateweaver's personal coven
– A showcase of kaleidoscopic Disciples of Tzeentch miniatures in a prismatic explosion of colour, alongside guides on painting them yourself

This battletome contains a one-use code to add the book to your digital library in Warhammer Age of Sigmar: The App.