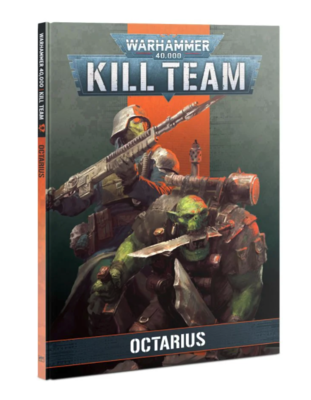 War Zone Octarius is a meat grinder. Within it, entire armies are consumed in the inferno of apocalyptic conflict with each passing day. In scorching deserts, steaming jungles, ruined cities, and industrial wastelands, Veteran Imperial Guardsmen take the fight to mobs of sneaky Ork Kommandos in endless battles for supremacy. In their every clash, the fate of armies or even worlds depends on their actions.

This is the paperback Kill Team supplement originally found in the Kill Team: Octarius boxed set, now available on its own. Inside these 96 pages, you’ll find full rules and background for both Veteran Guardsmen and Ork Kommandos Kill Teams, datacards (including fillable blanks to copy), equipment lists, Spec Ops rules including Rare Equipment, and the Octarius War Mission Pack including nine missions for use in your games of Kill Team.

You’ll need a copy of the Kill Team Core Book to make full use of this supplement.