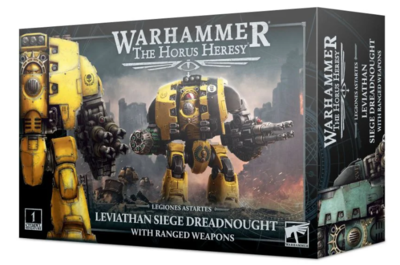 This multipart plastic kit builds one Leviathan Siege Dreadnought, an intimidating armoured walker loaded with powerful munitions. The kit provides three heavy weapons to choose from – a cyclonic melta lance, grav-flux bombard, and storm cannon – each of which can be mounted on either of the Leviathan's arms. The Dreadnought's torso houses a pair of additional weapons – your choice of heavy flamers or twin-linked volkite calivers – and it can also be armed with an optional hull-mounted phosphex discharger. This impressively customisable kit includes a choice of three different chest plates, two different cowls, and three different groin armour plates. The Dreadnought's joints and head can all be positioned separately for a range of poses, with alternate foot options to give the appearance of stomping forward or planting its feet to fire.