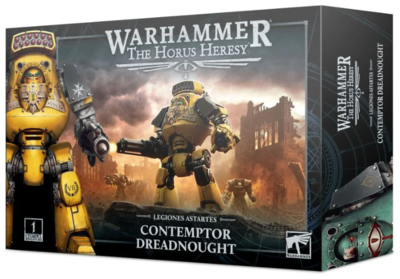 This multipart plastic kit builds one Contemptor Dreadnought, an impressive combat walker with an absolute trove of weapon options. The kit provides eight different ranged weapons to choose from – a conversion beam cannon, Gravis autocannon, Gravis bolt cannon, Gravis lascannon, Gravis melta cannon, Gravis plasma cannon, Kheres assault cannon, and volkite dual-culverin – each of which can be mounted on either of the Contemptor's arms. The kit also includes two melee fists, each of which can be built as either a Gravis power fist or Gravis chainfist, and sports your choice of in-built weapon – a combi-bolter, graviton gun, heavy flamer, meltagun, or plasma blaster. The model can even be built with a hull-mounted havoc launcher or head-mounted helical targeting array.

You’ll also find a variety of alternate components and cosmetic options, including two heads, four different carapace designs, a choice of claws or fingers for the power fists, and scrollwork and tilting shield accessories. The model's joints, head, and power fist digits can all be assembled to offer a wide range of poses, ensuring that no two Contemptors look quite the same.