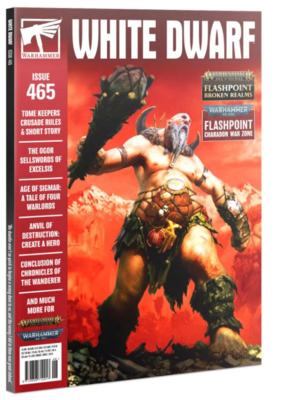 Warhammer 40,000 Flashpoint: Charadon War Zone
Paint Splatter: Colours of Contagion
Painting guides for the vectoriums of the Pallid Hand and the Fecund Ones.

The Tome Keepers: Legends of a Chapter
We explore writing stories for our home-grown Chapter, the Tome Keepers. Plus our very first short story about them.

Echoes from the Warp
We look at the tricky balance between playing for fun and playing to win.

Warhammer Age of Sigmar Flashpoint: Broken Realms
The Tome Celestial: The Sellswords of Excelsis
A mercenary warband of ogors arrive at Excelsis just before Gordrakk’s Waaagh! But can they be trusted?

Warhammer Age of Sigmar Flashpoint: Broken Realms
The Siege of Excelsis
Four new battleplans, enabling you to fight the colossal battle for Excelsis.

Warhammer Age of Sigmar Flashpoint: Broken Realms
Anvil of Destruction
Want to create your own ogor or Mega-Gargant hero? Well, now you can!

A Tale of Four Warlords
Lumineth Realm-lords, Cities of Sigmar, Slaves to Darkness and Hedonites of Slaanesh return for more warlords action. This month, they hit the 1,000-point mark.

Rules of Engagement
We feature a designer’s commentary on Broken Realms: Kragnos and the exciting effects that the rules in the book can have on your armies.

Path to Victory
An in-depth tactical exploration of the two latest warbands to descend into Beastgrave: the Crimson Court and Hedkrakka’s Mob.

The Hostiles of the Cursed City
What lurks in the darkness of Ulfenkarn? A whole lot of undead nasties, that’s what. Consider this a friendly introduction.

Fangorn™ Unleashed
A handy tactical guide for Fangorn’s most loquacious Ent, Treebeard. Plus, handy tips for using his Hobbit companions.

Sagas of the Realms
There are so many stories about the Mortal Realms, but where to begin? This article provides you with a handy reading order for the tales of the realms so far.

Chronicles of the Wanderer: The White-bearded Ancestor
In the concluding part of this epic saga, The Maker makes the difficult decision to abandon his people. Well, almost …

Sleeved Issue
Each physical copy of Issue 465 is sleeved and comes included with the following: