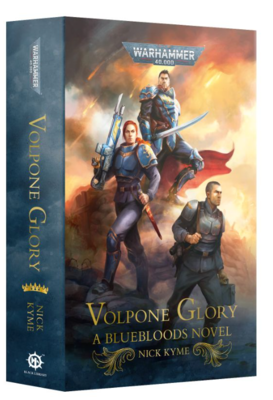 As war rages across the Sabbat Worlds, the Volpone Bluebloods are sent to Gnostes at the head of a massive Imperial host. Tasked with the liberation of the Agria island chain from the entrenched Blood Pact, the haughty soldiers of the Volpone find their mettle sorely tested in a brutal meat grinder.

After a punishing setback threatens to derail the campaign, an unlikely champion rises through the ranks, and victory once again seems possible. But the propaganda of war is a fickle beast, and the Archenemy are cultivating a plot the Imperium can scarcely fathom. Through glory and honour, the Volpone are desperate to prevail, but can they endure the rigours of the bloodiest campaign in their vaunted history and come out the other side intact?