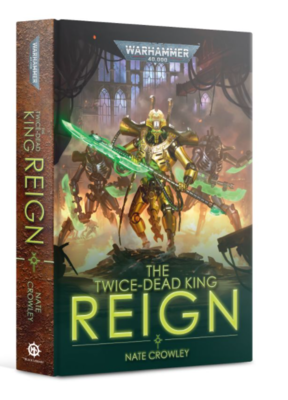 After centuries of exile, the necron lord Oltyx has at last been granted the thing he has always craved: the throne of the Ithakas Dynasty. Kingship, however, is not quite what he had hoped for – Oltyx's reign currently exists aboard the dying battleship Akrops, as it lumbers away from the ruins of his crownworld. Behind it is a hostile armada of unfathomable size, launched by the barbaric alien war-cult known as the Imperium of Man. And within the Akrops' sepulchral hold, an even greater threat festers – the creeping horror of the flayer curse. Faced with such overwhelming odds, Oltyx leads a desperate voyage into a darkness so profound that salvation and doom look much the same. If he and his dynasty are to make it through that long night, Oltyx will have to become a very different sort of king.