THE END OF ENLIGHTENMENT (HB) 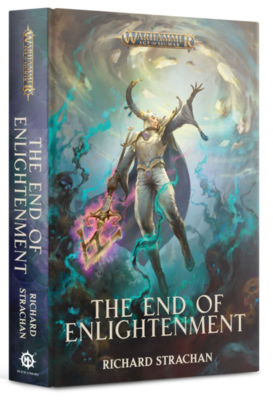 THE STORY
Long have the Lumineth Realm-lords held themselves aloof from the troubles of the Mortal Realms. But now, as Nagash asserts his dominion over the living and the dead, the Lumineth must strike back.

For Carreth Y’gethin, a legendary warrior and powerful Stonemage, the war against Nagash is merely a distraction from the Lumineth’s true purpose – to hone their spiritual equilibrium and prevent their realm falling back into the madness that once plagued it. But when Carreth’s sister is horrifically killed fighting the undead, he finds himself inexorably drawn back into the struggle.

As the Ossiarch Bonereapers invade Hysh, Carreth is charged by Teclis himself to defeat one of Nagash’s most dangerous generals, who is destined to destroy the Light of Eltharion, the Lumineth’s greatest champion. The Stonemage must conquer the warring emotions within and slay this champion of Death, lest the light of Hysh fade from the Mortal Realms forever…