LUTHER: FIRST OF THE FALLEN (HB) 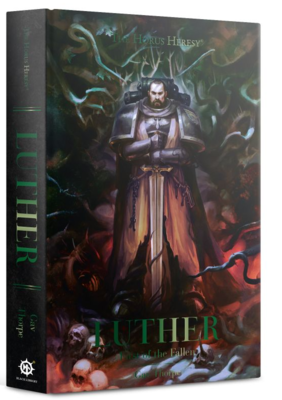 Knight of the Angelicasta. Saviour of the Lion. Grand Master of the Order. Lord of the Dark Angels. Protector of Caliban.

Chaos Heretic. Destroyer of Caliban. Sorcerer of the Abyss. Arch-traitor. Dark Oracle. First of the Fallen.

Can one man be all of these things?

Kept alive and imprisoned for ten thousand years, Luther is the curse and the salvation of the Dark Angels made manifest. None are so close to the heart and history of the Chapter as the man that embodies all that was great about the First Legion and all that is shameful about the Dark Angels. In his story is writ the tale of the Horus Heresy and the fall from Enlightenment in a single long life. Glory, honour, pride, shame, and betrayal weave a tapestry of truth and lies that the Supreme Grand Masters of the Dark Angels have sought to understand and unbind across ten bloody millennia. Luther claims repentance for his past deeds, but was it his sins that condemned the Chapter to its secretive fate, or should warnings from history have been more closely heeded?