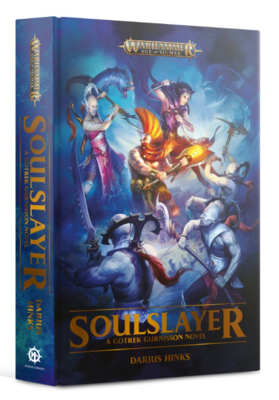 Gotrek Gurnisson is the greatest Slayer of the age. He is a furious relic of a dead world, a sworn enemy of Chaos and a stranger in the Mortal Realms. Now, reborn and hungry for vengeance, he crosses the war-torn lands of Chamon armed with new oaths, pitting himself against the forces of evil.

Accompanied by the lethal aelven assassin Maleneth Witchblade, Gotrek marches to war with the Fyreslayers of the Grymm Peak Mountains, revelling in his newfound sense of purpose. The fire in the Slayer's soul has not gone unnoticed, however. Far beneath the sea, the Idoneth Deepkin are stirring, summoning an ancient power from the abyss – and their sights are set on Gotrek!