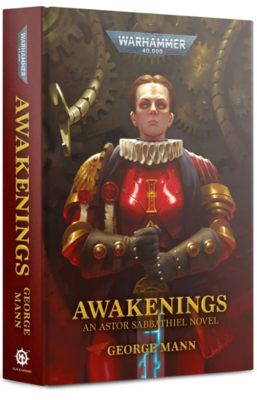 Inquisitor Astor Sabbathiel has a problem: she’s been dead for nearly a hundred years… or so everyone believes.

The last thing she remembers is being shot at point-blank range just as a roiling warp storm engulfed the Calaphrax Cluster. Now, she finds herself awakening on a distant Ecclesiarchy stronghold and indebted to a magos called Metik, who has brought her back from the brink of death.

Shortly after her resurrection, Sabbathiel is called to an audience on the planet Hulth by a high-ranking inquisitor of the Ordo Hereticus, Heldren, who informs her that after being lost for so long, the members of her former conclave no longer trust her. Forced to undertake a mission to prove herself worthy and true, Sabbathiel soon discovers a secret agenda beginning to unfold – one that contains a burgeoning threat to the Imperium that only she can avert. Trying to assemble the fragments of the past to make sense of the mysteries of the present, Sabbathiel will need to act fast and decide who to trust quickly, or else risk the fate of the future.