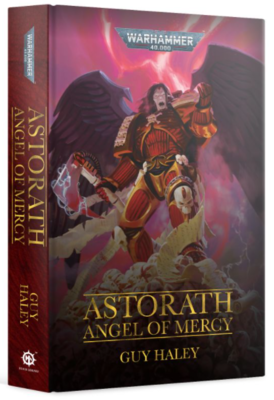 Following the Devastation of Baal and the arrival of the Primarch Roboute Guilliman’s Indomitus Crusade, Commander Dante of the Blood Angels has been appointed Lord Regent of all Imperium Nihilus. Working with the successor chapters of the Blood Angels, Dante commands that the area around the Red Scar be scouted in preparation for reconquest. The Red Wings’ sweep has led them to the foetid world of Dulcis, dangerously near to the Cicatrix Maledictum itself. Decimated by the tyranids during the war for Baal and only lightly reinforced by Primaris Space Marines, the Red Wings Chapter are in no position to deal with the events that unfold there. Strange psychic phenomenon and a deadly xenos enemy threaten the great hope of all the Chapters of the Blood – that the flaw in Sanguinius’ geneseed has at last been tamed. Drawn by the Black Rage to Dulcis, Astorath the Grim, Lord High Chaplain and Redeemer of the Lost, comes to aid the Red Wings. But what he discovers there will shake the Chapters of the Blood to their very core.