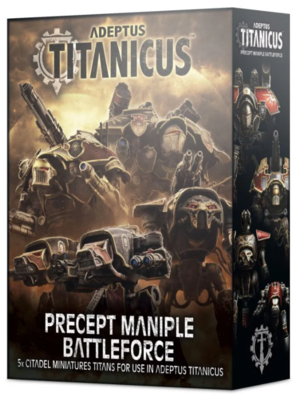 In this set you'll find 534 components with which to build five plastic models:

Each Titan has optional parts for added variety, including heads, tilting shields and carapace plates.

The set also includes 1x 120mm oval base, 2x 105mm oval bases, and 2x 80mm round bases, along with five cardboard command terminals – one for each Titan in the box – and 25 weapon cards, covering weapons options for each god-machine.

Rules for the Precept maniple can be found in the Crucible of Retribution and Loyalist Legions expansions for Adeptus Titanicus.