By Fire and Sword: Swedish infantry 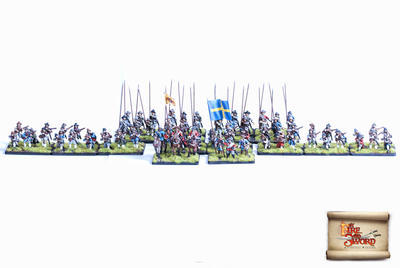 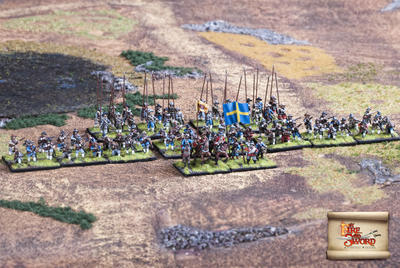 On the eve of the war the infantry of "His Majesty's militia" consisted of 15 Swedish and 9 (or 7, depending on sources) Finnish regiments of foot, named after the province from which they were recruited on the basis of common conscription. They consisted usually of 8 (sometimes 9, 10 or 11) companies, each company was composed of 18 officers and 132 privates ( 72 pikemen and 54 musketeers, six other soldiers were a reserve.) A regiment was divided into two squadrons of 4 companies, which often acted independently (e.g. one squadron commanded by the colonel and the other by the lieutenant-colonel of the regiment). The pikemen no longer used any armor and were armed with pikes and sidearms for hand-to-hand combat (rapier). Musketeers had matchlock muskets and, just like the pikemen, side arms. In theory, soldiers were to start a campaign in a single color uniform, specified for each regiment. However, there were difficulties in equipping Swedish troops marching from Pomerania and, above all, the Finnish units of the Livonian army.

ATTENTION: Miniatures from this set can be used in the following armies: Kingdom of Sweden, Polish-Lithuanian Commonwealth, Brandenburg and Prussia, Kingdom of Denmark and Norway, Courland, Royal City of Gdansk and Holy Roman Empire - please check their army lists for details.