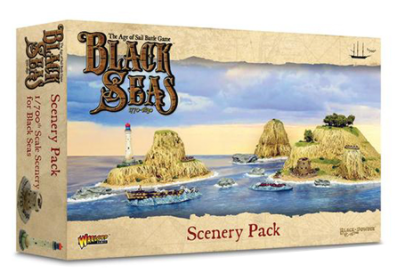 You’ll find within the box plenty to add variety to your games of Black Seas. Rocks of various shapes and sizes can provide tricky obstacles to negotiate with your vessels. They are also capable of blocking line of sight – a wily Captain, should his sailing be savvy enough, can use them to stalk an enemy in relative safety before pouncing upon his prey. But be careful not to collide. They are particular use in Scenario 11 (Page 48 of the Black Seas Rulebook).

Sinking vessels can lend a game an extra layer of authenticity. Use them to replace your own ships as they fall in battle. Wrecks are treated the same as rocks, as such a sinking vessel can provide a sudden and unexpected obstacle for either side to negotiate. Alternatively, they could be used as the objective for a scenario – to rescue a crew or a valuable cargo.

Fortifications are a significant part of a number of scenarios in the book, such as scenario 7 – Coastal Raid (Page 44 of the Black Seas Rulebook). Martello towers were a common sight along the British coastline and employed a 360-degree arc of fire – a formidable coastal defence. Also included are gun emplacements and a lighthouse.

Miniatures are a mixture of metal & resin