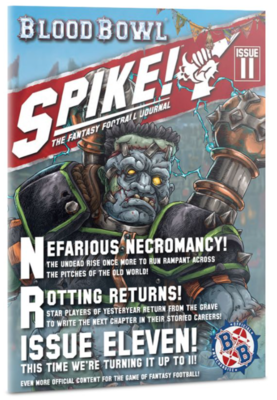 - Things That Go Bump in the Night: covers where Necromantic Horror teams arise from, as well as an overview of each position – Zombie Linemen, Ghoul Runners, Wraiths, Werewolves, and Flesh Golems.

- Famous Necromantic Horror teams, including the Wolfenburg Crypt-stealers, Bruendar Grimjacks, and Pumpkin Patch Petrifiers, plus full profiles for the Star Players that can be hired.

- Star Player Spotlight: Frank ’n’ Stein – the Flesh Golem that combined the brains and brawn of two decent players to become something greater than the sum of his parts.

- Dirt From the Dugout: Mindy Piewhistle returns with the graveyard dirt on rumours of a Star Player's potential retirement – could he have a life after the gridiron?

- Star Player Spotlight: Wilhelm ‘the Wolfman’ Chaney – growing up as an outcast from Human society has made Wilhelm a somewhat eccentric personality, but his savagery in the field more than make up for it.

- Sylvanian Night-time Leagues: Custom rules for running a league season as the Spooky Skull Cup, as well as special rules to represent games played in Sylvania.

- Chat with the Rat: Hackspit sits down with the coach of the Bruendar Grimjacks about scouting and recruiting new players for Necromantic Horror teams.

- Trick or Treat: the pro playbook for new Necromantic Horror coaches, including advice on raising a solid roster, developing their skills, and running effective plays.

- Star Player Spotlight: Bryce ‘the Slice’ Cambuel – after a premature and self-inflicted end to his career as a living player, this chainsaw-wielding Blocker was revived to give it another go in the afterlife.

- Eerie Inducements: hire some of the unsavoury characters that abound in these dark and dismal lands.

- A new episode of Mighty Blow!